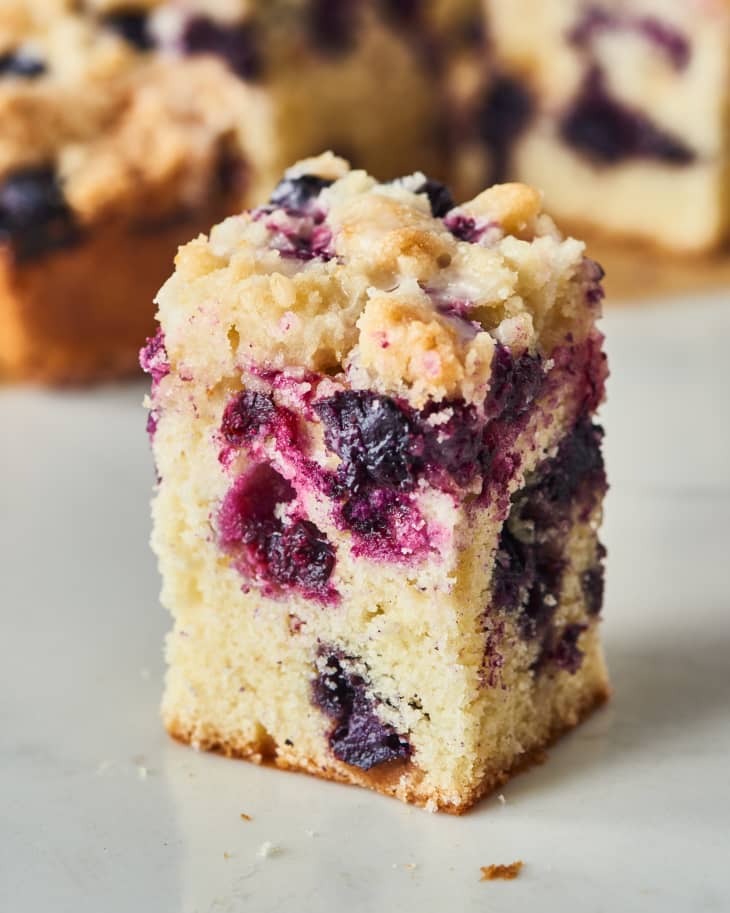 Jul09November 17, 2021
We independently select these products—if you buy from one of our links, we may earn a commission.

If you love coffee cake, let me introduce you to its fruit-filled friend, the buckle — a slightly sweet breakfast cake that’s the ideal vehicle for summer fruit. Making it is easy (and fun!): Fold fresh, in-season blueberries into a thick vanilla batter, then top with even more blueberries and a buttery streusel. After baking, drizzle on a creamy lemon glaze, which adds brightness to every single bite.

What’s the Difference Between a Buckle and a Coffee Cake?

Before snacking cakes became common culinary nomenclature, buckles were the simple cakes found on kitchen counters. The old-fashioned sweet is similar to coffee cake because it’s a single-layer cake served for breakfast or brunch. The addition of fruit, especially blueberries, is what sets a buckle apart from a common coffee cake.

A buckle batter is similar to a traditional vanilla cake batter — butter, sugar, eggs, and vanilla — but you’ll use cake flour instead of all-purpose flour. The low protein content and fine texture of cake flour gives the buckle a soft and pillowy structure. You’ll also use just 1/2 cup of milk in the batter, which gives the batter the thick consistency needed to suspend the fresh blueberries throughout the cake. Transfer the batter to the pan, then scatter the remaining berries on top and cover with the streusel topping.

Lemon is blueberry’s BFF, so it’s only natural to include the sunny citrus here. Rub the fragrant zest into the streusel sugar to infuse the sweet stuff with bright and lemony flavor, then save the zested lemon so you can use the juice in the glaze. As it bakes, the cake will appear to buckle as the berries settle into the cake and the sweet, buttery streusel becomes a crunchy topping.

The Best Blueberries for Buckles

Fruit is the star of this breakfast bake, so you’ll want to use the freshest summer blueberries you can find at the farmers market or the grocery store. You’ll need 2 cups (or 12 ounces) to make this buckle.

Skip the frozen blueberries here. Because they release their juices more easily than fresh berries, you’ll end up with an under-baked buckle. Save them for another use, like smoothies or a French toast casserole.

There’s no sense in letting a zested lemon go to waste! You’ll mix the lemon juice and powdered sugar into a thin citrus glaze, which soaks into the cake and adds pops of punchy lemon flavor that brings out the best in the blueberries.

This buckle is baked in a simple 8-inch square baking pan — the perfect size for a brunch spread or for nibbling on over the course of the weekend. Pair it with more fruit (or something savory, like eggs and bacon), and don’t forget the mugs of hot coffee.

This tender breakfast cake is studded with fresh blueberries and topped with a sweet streusel and lemony glaze.

Per serving, based on 9 servings. (% daily value)

For the streusel topping and optional glaze:

Storage: Tightly wrap in plastic wrap and keep at room temperature for up to 2 days.